A Brief History of Bicycles in the Los Angeles Area

A Brief History of Bicycles in the Los Angeles Area

In the late nineteenth century, the introduction of the modern bicycle sparked a nation-wide bicycle craze. Fervor for the two-wheeled vehicle especially resonated in Southern California, a region that prided itself on ideal year-round conditions for healthy outdoor activity.

Enthusiasts organized group rides across the Southland, formed local bicycle clubs, and lobbied for the construction of bicycle roads.

Perhaps the most famous bicycle route was the California Cycleway, an elevated bikeway whose plans called for it to extend from the historic Los Angeles Plaza to Pasadena's Hotel Green. Made of Oregon pine, the causeway featured easy grades, sparing cyclists from the hilly terrain between the two cities.

A one-and-a-quarter-mile stretch of the privately financed cycleway, pictured below in photographs from the Pasadena Museum of History, opened in 1897 between the Hotel Green and South Pasadena's Raymond Hotel, but by the first decade of the twentieth century it had fallen into disuse. Its full route to Los Angeles was never completed. Today, the Arroyo Seco Parkway uses much of the California Cycleway's original right-of-way. 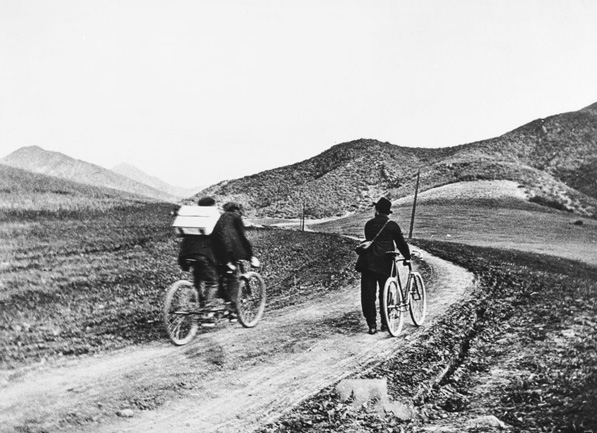